Call of Duty: Black Ops – Zombies is more or less what you’d expect from a game that carries the name. The first true sequel to Call of Duty – Zombies, it’s dramatically improved over its predecessor in terms of visuals and gameplay. It’s a competent, ok looking first person shooter that pits you against legions of werewolves. Or maybe it’s vampires. I can’t remember. Though it is executed (ha!) well for the most part, the high price tag, unreliable multiplayer and control issues make it difficult to recommend too highly.

If you haven’t played Call of Duty – Zombies or any of the several console renditions; it’s a fairly straight forward, if engaging formula. You are simply trying to survive in a map, and every zombie you kill provides in game currency required to improve your defenses and upgrade your weapons. Occasionally there are secondary objectives, but the game is based entirely around one concept: survive as long as possible. Gameplay is simple, but considering its origins (a spin-off of a mini-game based on the newer main Call of Duty series) it’s quite a bit of fun.

The graphics are improved over the previous mobile iteration, but are far from the best. At times it can look good, especially on high-end devices, but there are many FPSs since that look significantly better. Modern Combat 5: Blackout comes readily to mind; funny because it is was created to be a generic version of Call of Duty. Still though, it is impressive for a mobile game, and it looks good enough that it should be played on a tablet if at all possible. 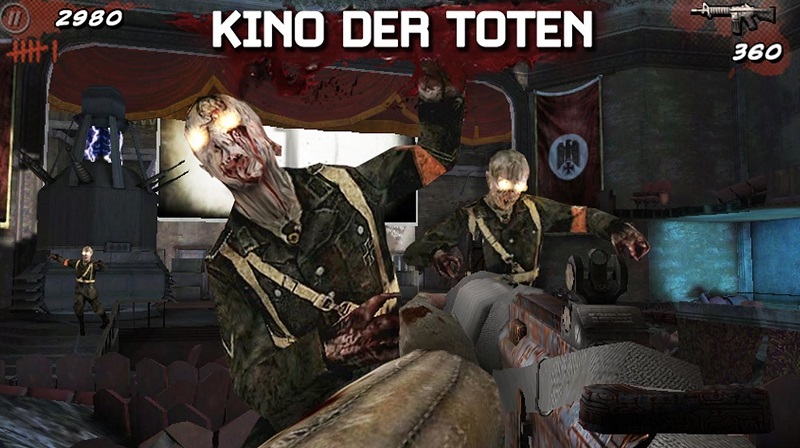 I don’t know why these zombies speak only Germ- oh right. I forgot all zombies are Nazis.

With a game based on survival, controls are obviously critical. You need to be able to blast the hell out of zombies with nary a moment lost, and unfortunately the controls here are a hindrance to that. My first complaint is the fact that you have to double-tap to fire. Why on god’s green and verdant earth they made that decision is well beyond me, but I can’t count the number of times I hit the fire button, expecting it to, you know, fire, and then died because it totally didn’t.

There are three control options which I appreciate. You can choose from swap, tilt, and joystick, but none of them provide the level of accuracy necessary for an FPS. I know it’s difficult to make perfect controls for a touch screen, few games have managed to do so, but there is nothing more frustrating than dying not because of a lack of skill, but because the controls were not doing what they were supposed to.

As an interesting side note, let’s discuss Dead-Ops Arcade mode. I assumed it would be a throw away, but I actually ended up enjoying it more than the main game. It’s even more straightforward than the main game, a straightforward top down arcade shooter with dual-stick controls (think Robotron.) The rules are simple: kill everything, get powerups. Profit. It’s really fun actually, and I was surprised to find a game of this quality hidden inside Call of Duty: Black Ops – Zombies. This definitely makes the seven dollar price tag easier to swallow. 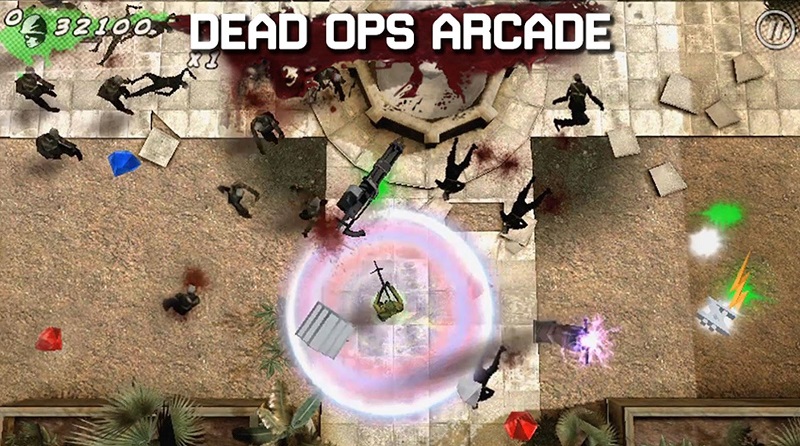 It reminds me of those goddamn Contra III top down levels. But in a good way.

Lastly, and possibly most importantly, multi-player. On the one hand, it’s impressive to have a fully functional multiplayer FPS I can have on my damn phone at all times. On the other hand, the multiplayer really doesn’t work that well. It was constantly stuttering, and games were dropped at an unforgivable rate. There is voice chat which again, would be impressive if it actually worked. I appreciate the effort, but the multi-player was just too glitchy to recommend as a positive attribute. 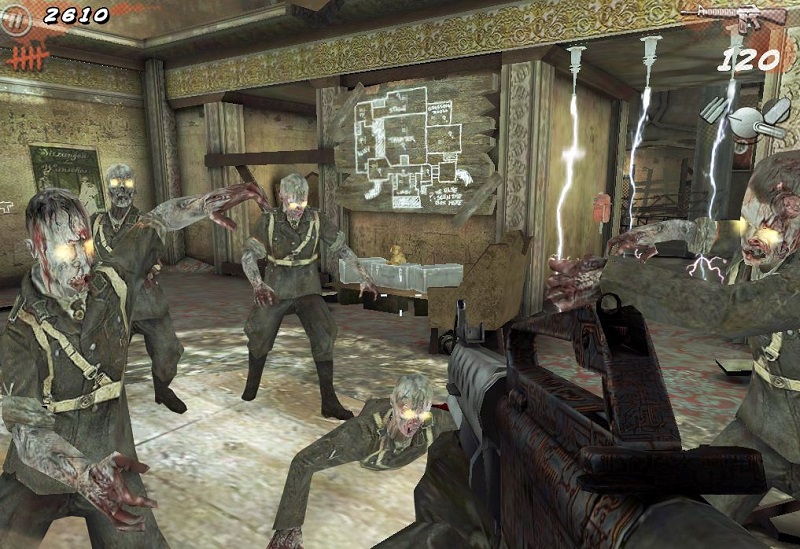 What is this, the future?!

It’s hard to give a negative rating to a game this ambitious, but in the end, it’s a generic looking FPS with a lot of bells and whistles that don’t work all that well. If this were pay to play I could give it a higher score, but the high price tag demands a harsher critique. If you’re a huge COD fan, or absolutely love COD – Zombies it might be worth it. For the rest of you, only get this if you are bored of the superior mobile FPS offerings, or really feel a deep urge to kill vampires. I mean mummies. Shit, what was it again?