It looks like the struggle between Apple and the Federal government is over…for now.

The much discussed legal dispute between Apple and the government has apparently been resolved after the FBI managed to unlock Syed Farook’s iPhone without Apple’s help. According to the Justice Department, it has retrieved the data in question from the San Bernardino shooter’s phone using a third party tool without Apple’s consent or involvement, and has formally withdrawn its court order. 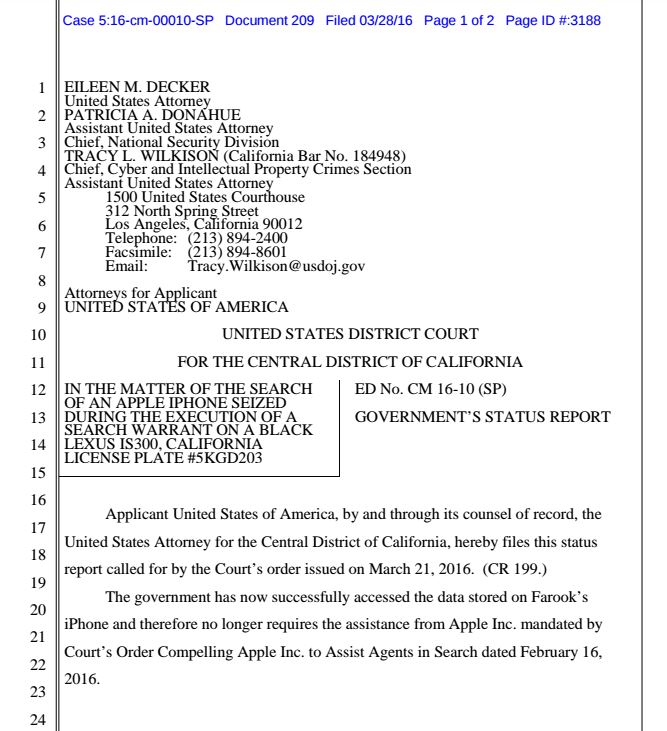 “Our decision to conclude the litigation was based solely on the fact that, with the recent assistance of a third party, we are now able to unlock that iPhone without compromising any information on the phone,”

So what did they find after finally managing to get in? The government is not saying anything, only that they are reviewing and processing the information.

After Apple stood its ground against the FBI in the highly publicized dispute over security concerns, the FBI managed to get in anyway. Due to the way it was resolved, no legal precedent has been determined, and it’s likely something similar will happen again until a court formally resolves the issue and determines how to appropriately address these government requests for access to private data.

The phone in question was an iPhone 5c running iOS 9, which could mean this mysterious third party tool exploited a vulnerability that isn’t in the iPhone 6 or 6S. If you still have a 5c (if anyone still does) it might be a good idea to upgrade your OS ASAP.

So what do you guys think? Are you happy with the way Apple handled the situation? Let us know in the comments.

Apple Denies the Government Access to iOS Despite Court Order